In the early hours of Tuesday morning, a Twitter user identified as thug life accused the afrobeats superstar, Davido of stealing his 2020 hit song, Jowo from Victor AD.

According to Thuglife, Victor AD confronted Davido after he heard the song and Davido allegedly blocked him on all social media platforms. Thug life claims Davido stole the record  ‘Jowo’ after he recorded ‘Tire You’  with Victor Ad in his studio.

“Victor AD just confirmed davido stole his record “Jowo”.According to AD; OBO heard d song after they recorded “Tire You”. He was surprised to see d song on ABT without him/his mgt consent; He said davido blocked him on Socials & threatened to ruin him. This wickedness ” 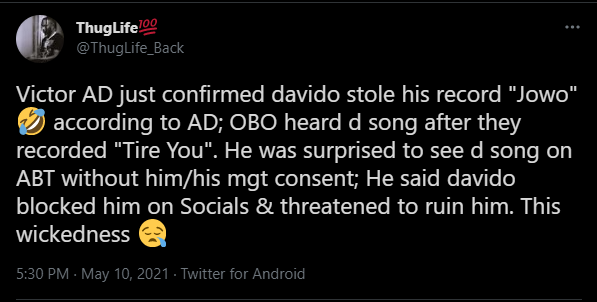 Though Victor AD or Davido is yet to react to the claims and accusations, Fans have taken to the popular microblogging site to react and drag the singer who just celebrated his 10th year in the music industry of theft. Read some of their reactions.