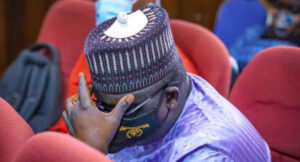 Justice Okon Abang of the Federal High Court in Abuja has ordered the remand of Abdulrasheed Maina at Kuje Correctional Centre pending the conclusion of his trial.

At the resumed trial on Friday, the counsel representing Maina, Adaji Abel formally withdrew and the counsel engaged by Mr Maina asked for a short adjournment to enable him to study the facts of the case.

Justice Abang granted the application for adjournment on the ground that the defendant who is presumed innocent is entitled to legal representation.

He subsequently adjourned the case to the 8th of December for a continuation of trial.

Maina’s trial had been holding in absentia after he jumped bail and ran off to the Niger Republic. A High Court in Abuja declared him wanted and subsequently he was arrested in Niamey.

The embattled former Chairman of the defunct Pension Reform Task Team (PRTT) was extradited to Nigeria on Thursday to face his ongoing money laundering trial.

A witness on Thursday told an Abuja high court that Maina, bought a property worth $2 million in the Jabi area of Abuja, the Federal Capital Territory (FCT).

Ibrahim, who is the prosecution witness nine (PW9) and a detective of the Economic and Financial Crimes Commission (EFCC), told the court that a prosecution witness, Adamu Modibbo, who testified to the EFCC regarding the said Jabi property, reportedly died of COVID-19 after his statement to the commission.

She added that about 32 documents, hard discs, and flash drives relating to properties linked to Maina and his family and details of some of his investments in Dubai and in the US were recovered from him.

“Particularly in Dubai, investigation revealed that his company, Northrich Company owned over 50 cars that were used for transportation business and he owns a villa in a High Ground area in Dubai.

She also disclosed that investigation proved that another of Maina’s company, Kangolo Dynamic, does no business but that the defendant created a bank account for it in which his name did not appear anywhere on the account documentation even though he was in control of all the deposits in it.

The EFCC operative stated that the investigation showed that Colster Logistics, belonging to Maina, had a Fidelity Bank dollar account which had an inflow of over $400,000 from cash deposits as at the time the company was investigated.

She said over N500 million was discovered in the account of Kangolo Dynamic, within the years Maina was PRTT chairman.

According to the witness, in the course of the investigation, letters were written to the Federal Road Safety Corps (FRSC), to verify the authenticity of the driver’s license used in opening some of the accounts; Code of Conduct Bureau (CCB) for Maina’s declared assets; Federal Civil Service Commission, Office of the Head of Service of the Federation (HOSF), and Accountant-General of the Federation (AGF), to confirm if Maina was still a civil servant and for his payslips.

After all, the documents and written responses of the government agencies were tendered as exhibits, the prosecution counsel, M.S. Abubakar, prayed the court to foreclose the right of the defendants to respond to the admissibility of the documents.

In his ruling, Justice Abang upheld the prosecution’s prayer, noting that opportunity was offered to the defendants to be in court to oppose the admissibility of the document in evidence, but they failed to appear and also failed to engage counsel of their choice.

Maina Back In Court For Trial After Extradition From Niger

Maina Bought $2m Property in Abuja, Others In Dubai, US, Witness Tells Court

UPDATED: Maina Extradited To Nigeria After Arrest In Niger Republic